Agriculture in Accordance with Nature

The goal at Mollesnejta is to demonstrate that applied agroforestry helps soil remediation and enables crops to adapt to our changing climate, while refraining from the use of agrochemicals. Its suitability to mitigate the effects of extreme temperatures and reduced precipitation was known long ago to the Incas, who applied agroforestry during previous climate change events, roughly a thousand years ago.

Located in the Cochabamba Valley, the testing ground Mollesnejta consists 16 hectares and is situated in the Quillacollo province, Vinto District, above the irrigation canal of the village of Combuyo, on the southern slopes of the Tunari cordillera at an elevation of ~ 2 800 m above sea level inside the Tunari National Park. It has a semi-arid climate (Köppen-Geiger: BSk), with an average air temperature of 18° C, and an average annual precipitation between 250 mm (during El Niño years) and 600 mm. The ground is very stony and situated on a hillside with varying degrees of inclination. In 1999, before the implementation of agroforestry, the soil was degraded by overgrazing livestock and traversed by numerous eroding rills. Evidence of a recent landslide was still present.

The soil recovers through the application of agroforestry: Up until today, approximately 46 500 trees and bushes were planted in Mollesnejta, and many nurtured plants that emerged through natural succession. Every year, the plant community in Mollesnejta grows more diverse, with 486 registered species, of which 206 emerged naturally. Covering the ground with creeping plants and mulch enables an increase in the soil´s fertility and its water retention capacity.

The main focus lies on identifying the best combinations of mostly fruit-bearing, woody shrubs and trees with native crops, in order to create plant communities that are resilient to the local extreme weather conditions. We were able to demonstrate that, for example, the Camueza-apple can produce fruits without artificial irrigation, when combined with appropriate accompanying trees. The increased biodiversity also helps establish a natural equilibrium among pests and their natural predators, which is why we do not have to apply any kind of pesticide in Mollesnejta.

Several experimental plots are managed and scientifically guided under cooperation with Bolivian and European universities. In 2015, the UN’s international year of soils, we started experiments for soil remediation with Terra Preta and fragmented limb wood; all the material originated from pruning within Mollesnejta. Our experience and results are shared in workshops and is published so that anyone who is interested can benefit from our progress and know-how.

In addition to plants, the animal life at Mollesnejta consists of a few dogs and cats together with a couple of llamas, donkeys, geese, chicken, bees, and carps that were added recently to the main water reservoir to eat mosquito eggs.

Additional information can be found on the homepage of the agroforestry network Espacio COmpartido en Sistemas AgroForestales ECO-SAF (http://www.ecosaf.org).

As of 2016, there are 39 different agroforestry plots implemented in Mollesnejta:

2001 Parcel with a combination of olive trees and Tagasaste (Chamaecystisus proliferus) (0.25 ha)

2005 Mixed parcel with trial specials to test for their suitability against landslides (0.01 ha)

2009 Vegetable garden with sample plots to test the effects of Terra Preta (0.05 ha)

2015 Parcel with animal fodder in combination with acacia (0.01 ha)

2016 Silvopastoral parcel with a living fence made up of native species, woody and fodder species (1 ha)

Conclusion: The higher the biodiversity and vegetation density inside an agroforestry parcel, the quicker the soil recovers, which is measurable in the species richness of self-seeding plants.

Erika Alba Gamboa: Evaluating the physical, chemical and biological soil properties among three different forms of land use (local-traditional, bio-dynamic, and agroforestry) in the district of Vinto, Bolivia. Thesis in the Field of Environmental Sciences – Universidad Católica Boliviana, Cochabamba, Bolivia, 2012.

Conclusion: Soils of agroforestry parcels have a higher share of organic material and a higher count of soil bacteria and fungi, when compared to soils of bio-dynamic or traditional local land use.

Conclusion: The best performing trees were those covered with mulch on their stem during the initial growth and development phase. The soil moisture beneath the mulch was at 70%, beneath stones at 12 %, and without any soil cover at 8 %.

Conclusion: Within a two meter buffer around the stems of all three species, an elevated content of the plant available phosphate and nitrate was observed.  Dodonea viscosa Jacq contributed the most to the organic matter content of the soil; Schinus molles L had the highest soil respiration. Every soil moisture measurement was above the reference value for the respective soil texture.

Lucas Landenberger: Analyzing the cross-section of soils with methods of in situ soil sciences. Survey performed within a framework of an internship, Albert-Ludwigs-Univ. Freiburg, Germany, 2014.

Conclusion: The amount of organic material in the upper 30 cm of soil can be increased from <1 % to >6 % within 10 years through the application of agroforestry.

Stefan Nahstoll: Conservation of irrigation water through the usage of charcoal within a plot of vegetables in Mollesnejta, Combuyo. Survey performed within the framework of an internship, Technische Universität München, Germany, 2015.

Conclusion: The application of charcoal increased the water storage capacity of the soil; the more charcoal is applied, the better the water availability for plant growth.

(Note: in Mollesnejta, charcoal is made from pruned wood using a KonTiki charcoal burner).

Conclusion: The application of 30 l/m² of fragmented limb wood, half of it worked into the top soil and the other half as a mulch cover, results in 30 % savings of irrigation water. It should be further analyzed, whether the fragmented limb wood of legume species results in an increase of plant growth, due to the closer carbon-to-nitrogen-ratio. (Note: Mollesnejta produces its own fragmented limb wood by processing pruning residue in a wood chipper).

Marcelo Bustamante: (work in progress) Conservation of irrigation water by application of charcoal and leaves in onion cultivation. Thesis in the Field of Environmental Sciences – Universidad Católica Boliviana, Cochabamba, Bolivia, 2016. 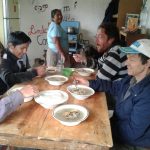 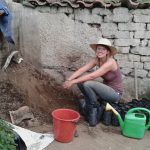 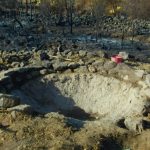 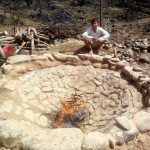 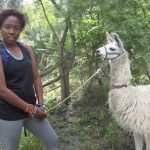 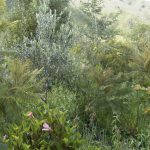 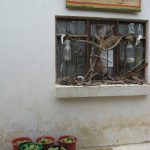